Shopping Cart
Your Cart is Empty
Quantity:
Subtotal
Taxes
Shipping
Total
There was an error with PayPalClick here to try again

Thank you for your business!You should be receiving an order confirmation from Paypal shortly.Exit Shopping Cart

The Grenofen section of the Route 27 at The Halfway House Inn was started on 7th June 2010, right at the start of our busiest period, thereby killing off our trade for several weeks. .

Originally scheduled to 2 weeks, then 3, it was 'finished' after the 9th week and it has now evidently been completed. The dry stone wall protecting the walking cyclists from the car park has collapsed twice already, and the rain water drains are in places above the points where water collects. The water has been diverted off the main road into the porch area causing damage, so we will see what Devon County Council have to say about repairs (please don't send the same lot to do it !!!)

Devon County Council once again probably chose the cheapest tender, and it shows. The fence has more ups and downs than a ride at Alton Towers and the gates the workers built don't open properly as the hinges are wrongly located.

At the moment the Grenofen part of the cycle route stretches a whopping 42 metres alongside the pub. Along this stretch, as users will be passing through the grounds of The Halfway House Inn, it is a stipulation that cyclists dismount and push their bikes. We hope that people will adhere to this request

However, they still have to fence the path off before it can be used, so it will be November at the earliest before we can enjoy access to the trail. 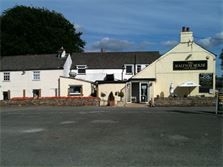 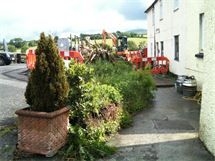 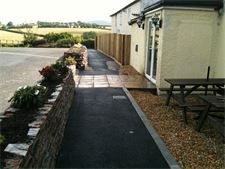